The Philosophy of health is the WHY! Why the body works and why the body ALWAYS work the way it does.  The Physiology is HOW the body works and how the body ALWAYS works the way it does.  Both are equally valuable to grasp a true understanding of our incredible bodies. Pain, symptoms and healing  pathways are all part of physiology and ALL are guided  by a set of rules that are applied with purpose.

You might remember that twenty years ago there was a great “Cholesterol Scare” (or what many now call the great Cholesterol Hoax) where  Cholesterol  became public enemy number one and was blamed as the cause for just  about everything?  What research showed was that Cholesterol was not necessarily a bad thing–in many cases  it was part of an intelligent adaptive response and to simply attempt to “chemically lower cholesterol”  without  improving the function and vitality of the body actually did more harm than good. 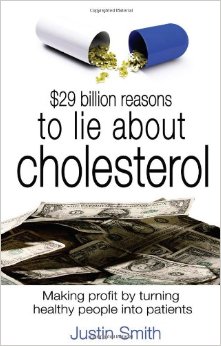 The question is what is the new “villain”?  Inflammation has been blamed as the cause of just about every health  problem  under the sun. Once it is properly  “vilified”-than  just about ANY efforts to “remove,  mask, inhibit, suppress  or hide it” will be encouraged and embraced. The role of inflammation  in the healing  process  has been misunderstood for many  years. However,  recent neurological  and immunological  research has given us a different picture and has shed some light on the role of inflammation in the healing process. 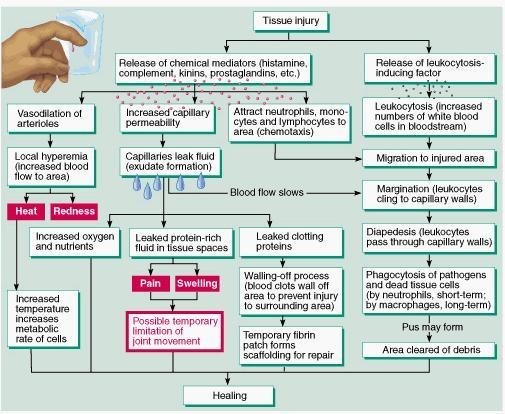 This chart  is taken from a standard  anatomy  and physiology  textbook and  a  similar chart can  be found in any  AP textbook in the  world. Take  a close  look at it and  look  at what modern  science  has to say about  inflammation. Notice  that each “symptom”  (heat, redness,  pain, and swelling)  has a definite  purpose  in  the  healing   and repair  of injured  tissue  and  the timing   and  sequencing   of   all  of  these   events   is  controlled   and coordinated  by the central nervous system.

Now,  what  this  means  is  that  you  can  NEVER  improve  health or resolve a particular health condition, by  pursuing  the symptom.  The goal should  NEVER  be to remove the symptom,  but rather to restore function which FACILITATES  the COMPLETION  of the healing process.

The inflammatory response is a natural  defense  mechanism that is triggered whenever body  tissues  are damaged in any way.  Most of the body defense  elements are located  in the blood and inflammation is the  means  by which  body  defense  cells and defense chemicals leave  the  blood  and  enter  the tissue  around  the  injured  or  infected site. Inflammation occurs  in response to physical  trauma,  intense  heat and irritating chemicals, as well as to infection by viruses and bacteria.

(1)   prevents the spread of damaging agents to nearby tissues

(2)   disposes of cell debris and pathogens and

(3)   sets the stage for the repair process.

The inflammatory process starts with a series of chemical “alarms”. Injured cells, Phagocytes, Lymphocytes, Mast cells and blood proteins are all responsible for the Inflammatory chemicals released into the extra cellular fluid. The most important inflamatory mediators are Histamine, Kinins, Prostaglandins, Complement and Lymphokines. Some of these mediators have individual roles in inflammation, but they all promote dilation of the small blood vessels at the site of an injury.

This is why you become red and hot at injury site/inflamed area, as more blood flows to the place affected. These same chemicals allow capillaries to become more permeable, which means that there is swelling occurring as fluid containing proteins (clotting factors and antibodies) seep from the blood stream into tissue spaces. This swelling may press on adjacent nerve endings causing pain

Pain also comes from the release of bacterial toxins, lack of nutrition to the   cells   in   the   area,   and   the   sensitizing   effects   of  released prostaglandins and  kinins.  If  the  swollen  and  painful  area  is a  joint, normal  movement  may  be  inhibited  temporarily  in  order for proper healing and repair to occur. 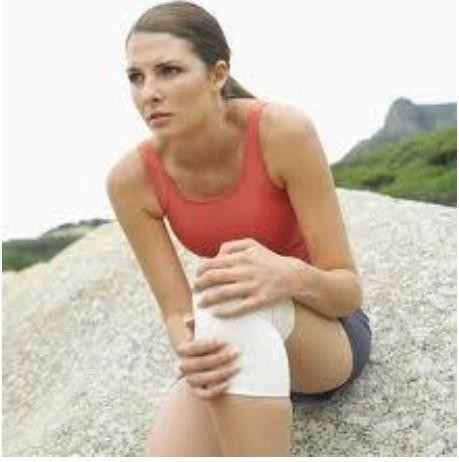 T-Lymphocytes  or T cells are involved in:

2) increasing the numbers of cells for a strong defense of the body.

3) the destruction of cancer and infected cells.

T-cells  are  one  of  the  first  immune  cells  to  become  aware  of  the presence  of  foreign  cells.  When  they  notice  that  an  infection  has occurred, they release different classes of immune cofactors, or biochemical  signals that activate  B  cells to  produce  antibodies  and other  immune  cells.  By   using  these  messages,  T     cells    recruit additional  cells  and  start  an  immune  reaction.  Regulatory  T  cells defend the  body  by  recruiting  other cells. These cells  “talk”  to one another with immune cofactors, which are small bioactive signals that are produced by cells. 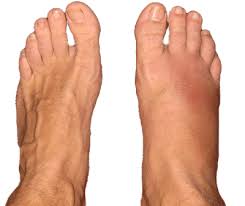 Although at first, edema may seem to be detrimental to the body, it isn’t. The entry of protein-rich fluids into the tissue spaces

(1) Helps to dilute harmful substances, which may be present

(2) Brings in large quantities  of oxygen  and nutrients  necessary  for the repair process.

(3) Allows  the  entry  of clotting  proteins which  form  a gel like fibrin mesh in the tissue space that effectively isolates the injured area and prevents  the  spread  of bacteria  and other  harmful  agents  into the adjacent tissues. Its also forms a scaffolding for permanent repair.

Inflammation is often associated with the inflammatory response to tissue injury or trauma, but inflammation is at work in the body at a bio-molecular  level on a constant basis without any obvious symptoms. Inflammation helps to maintain homeostasis in the body by coordinating  immune  function.  including  T cell  mediation to identify    and eliminate cancer  cells.  (we will deal with this in future blogs) 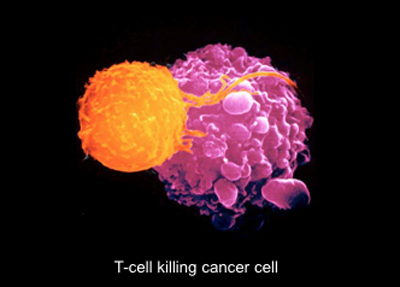 When   you   see  the   letters   itis   at  the   end  of  a  word,   it  means “inflammati on  or’ The  first  part  of the  word  indicates  the  part  of the body  that  is  involved  in the inflammation  process.  For  example,  the word dermatitis  means inflammation  of the skin (derm)  and arthritis  is the  inflammation  of a joint  in the  body.  It most cases  the term  itis at the end of a word denotes  a chronic condition.

Chronic   inflammation    is   an   inflammatory   response    of   prolonged duration–weeks,    months,   or  even   indefinitely.  The extended   time course   is   caused   by    persistence   of    the   causative   stimulus   to inflammation  in the tissue,  repetitive  use of anti-inflammatory  drugs,  a weakened   immune  system,  or an  improper  nerve supply. Chronic  inflammation inevitably causes tissue damage  and is accompanied  by simultaneous attempts at healing  and  repair.  The exact   nature,   extent   and   time  course   of  chronic   inflammation  is variable  and  depends on the  balance  between the  causative agent and the attempts of the body to remove  it.

There  are  more  drugs  designed  to  fight inflammation  in the  human body  than  any  other  single  category  of  drugs.  Anti-inflammatories  stop  or  disrupt inflammation   by  suppressing  or altering    the   chemical    signals   associated    with   the   inflammatory response.  This  interrupts  the  natural  healing  process  and  can  often lead to conditions of chronic inflammation. 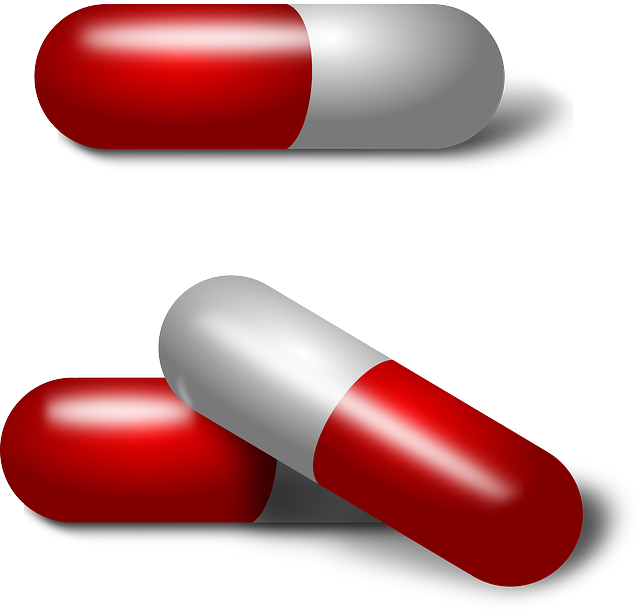 NSAIDs  are  often used  to  stop  inflammation,   but  they may  not  be strong  enough  or may  have  too  many  side effects.  NSAIDs  work  by inhibiting   production   of prostaglandins,   the  chemicals  in  our  bodies that enhance inflammatory  effects. Prostaglandins   are  also  important   to  the   normal   functioning   of  a number   of  other   processes   including   digestion.   Because   of  this, inhibition   of  prostagladins  by  NSAIDs   can   cause   indigestion   and stomach and duodenal  ulcers.

Corticosteroids  are immunosuppressive. This means that they reduce the  activity of your  immune  system.  A healthy  immune  system  helps defend your body against bacteria, viruses, and cancer.  Use of  corticosteroids  decreases  the  body’s  helpful  immune  activity, which  can   increase  susceptibility  to infection  and  interfere   with  the healing process.

“Corticosteroids    are  commonly   used  for  the  treatment   of allergies,  autoimmune  diseases  and inflammatory  conditions. I  consider   them   dangerous    drugs, much   misunderstood, abused and over prescribed. Steroids cause allergies and inflammation  to disappear  as if by magic.  In fact, the magic is nothing  more than direct suppression  of the immune  system. Steroids  are toxic,  cause  dependence,  suppress,  rather than cure disease, and reduce the chance of healing by natural treatment.  Moreover, they weaken immunity.” – Andrew   Wei l, M.D.

The Central Nervous System controls  and coordinates every single system down to the tiniest microbes in the human body including the entire healing and repair  process. The CNS  does this by  sending and receiving billions of nerve messages every single  minute.  The health and internal resistance of the body is largely dependent on the communication ability of the nervous system. 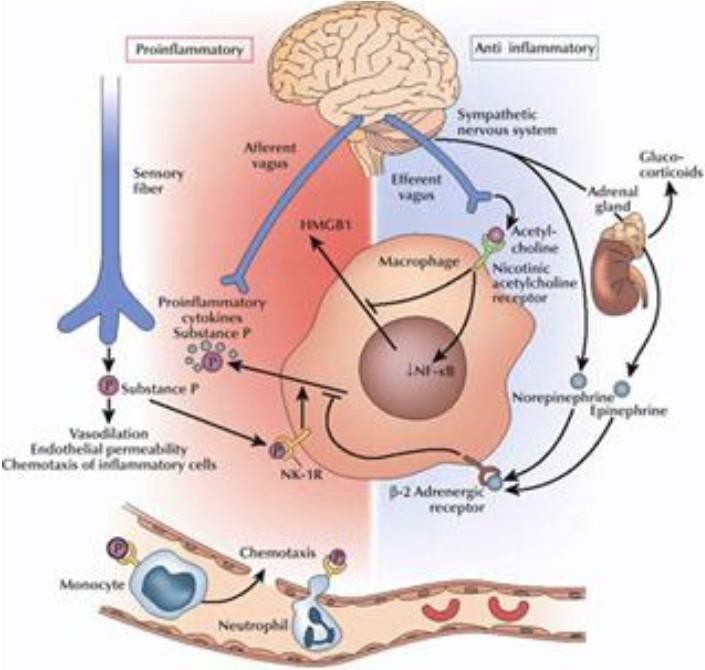 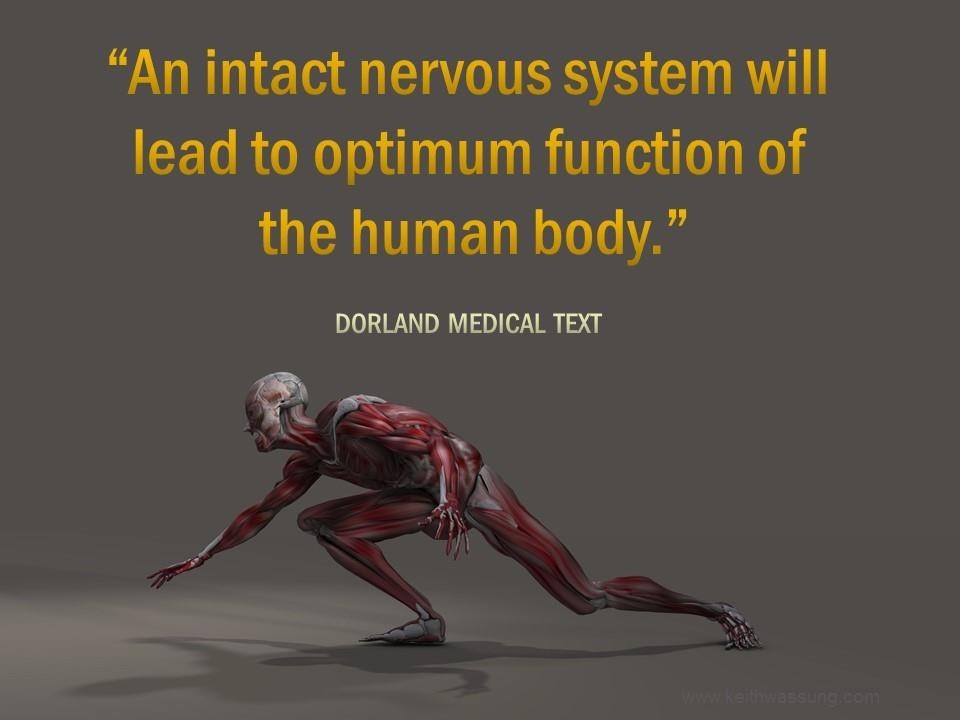 Remember,  if the  nervous  system  is not functioning  like it supposed to-healing  will  never  be  optimized  or complete.  This is one of the most important concepts that must be understood when attempting to resolve health issues.

At  all  biological  levels  (molecular, cellular, organ), communication between elements is essential for the proper functioning of system. This communication process is essential to the homeostasis of the body. The foundation of health begins with a properly functioning nervous system, to the extent that we can equate levels of function  and healing capability with the ability of the nervous system to send and receive  information.

The trend in immunological research clearly demonstrates that restoring, balancing, facilitating and maximizing the communication systems  of the body is the key to optimal health and immune  system function. 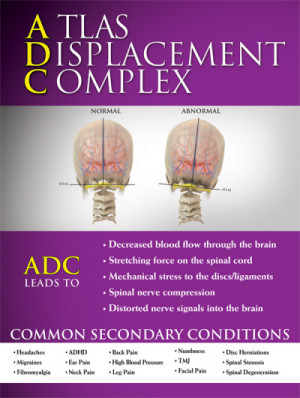